What is Applied Kinesiology (Part 3 of 3) 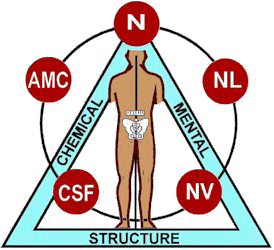 In Part 3 we’ll talk about what actually happens in the office.  Keep in mind, just as two different artists won’t ever paint the same exact picture; two different applied kinesiologists (even if they’re both chiropractors) won’t ever give you the exact same treatment.  The type of treatment you receive will also vary based on your presenting complaint.

Generally speaking, chiropractors over-treat and under-diagnose, while medical doctors over-diagnose and under-treat.  What I mean by that is a lot of chiropractors adjust as many joints in the body, because they haven’t pinned down the problem.  Then they cross their fingers in hopes for a good outcome.  And many medical doctors order too many (expensive) tests, may find some problems, but then cannot offer actual treatments to the person, other than medications and hope for a resolve of symptoms without side effects.

Ideally, there should be a middle ground.  A good applied kinesiologist will use in-office, non-invasive tests (unless warranted), treat only the primary areas in need (i.e.: not the compensations/symptoms), and resolve the cause which will get rid of the problem.

I’ll use two scenarios to help you better understand our approach.

Let’s just elaborate on, and review some basic concepts first.  Functional muscle testing is a measurement of the nervous system.  To keep it simple for now, let’s assume there are only 2 possible outcomes for a muscle test – inhibited or facilitated.  And lastly, each muscle relates to an organ or gland, and a malfunctioning muscle MIGHT reflect a malfunctioning organ or gland, and vice versa.

After taking a thorough history from the patient, we begin with the examination.  During the initial visit, a standard medical examination is performed.  This may include neurological, orthopedic, and/or physical (e.g.: abdominal, EENT, respiratory, etc.) exams.  Let’s assume those tests are within normal limits.  They very often are, because those tests are mostly designed to pick up pathology, which probably 90% of people don’t have.  If the doctor suspects a major problem, he or she should obviously refer the patient for further tests outside the office.

Now, the applied kinesiologist (speaking from this “artist’s” perspective) would functionally muscle test all the muscles that support the low back all the way down to the feet.  Let’s now say that he/she finds inhibitions in the abdominals and hip flexors.  A basic understanding of bio-mechanics would reveal that if a person has a “weak”/inhibited “”front””, it makes sense for them to have a tight and painful back.  Taking it a step further – the Dr. knows that the abdominals are related to the small intestines.  Through further testing, the Dr. finds out the abdominal muscle inhibition also relates to the digestive complaint (b/c there is a correlation between the abdominals and the small intestine).  Next, food sensitivities are tested via ingesting common food allergens (wheat, dairy, etc.) and then testing the nervous system’s response through muscle testing.  Additionally, a supplement is discovered that allows the body to help the small intestine digest better while at the same time, allows the abdominals to fire better (facilitate) because of the muscle-organ connection.

So in this example we found out that the patient is sensitive to wheat, which irritated his small intestine, in turn causing a functional inhibition of his abdominals (b/c of the muscle-organ correlation) which led to his back pain.  Also, the wheat sensitivity caused the digestive complaints and lack of energy.

For this patient there was no need for a colonoscopy, endoscopy, blood tests for food allergens, etc.  Nor was there a need to adjust every joint in the lower extremity, pelvis, and lower spine.

Let’s look at one more.

Case #2– A female patient presents with severe neck stiffness, right- and left-sided elbow pain, and right- and left-sided carpal tunnel syndrome.  She also has hormonal imbalances (PMS).  She presented with a letter from her Orthopedic surgeon which stated “She is ready for the surgery, but I will do the operation once she decides that she does want the surgery.”

Initial tests were done as in case #1.  These actually had many positive findings, but were not an emergency.  Therefore, conservative treatment was warranted to start with, and it wasn’t necessary to look further.

After a thorough applied kinesiological exam, it was determined that the carpal tunnel syndromes and elbow pains were a result of nerves being interfered with because of tight neck muscles.  Bear in mind that the nerves that travel down the arms originate in the neck.  Next it was determined that the tension in the neck muscles was being caused by an inhibition of muscles in her pelvis (the bio-mechanical mechanisms are too extensive to list here).  The inhibited muscles were the right and left Gluteus Maximus, which relate to the reproductive organs.  Treatment was directed towards facilitating the Gluteus muscles through “structural work” and natural supplements aimed at hormone balance (b/c of the reproductive connection).  After 1 month worth of treatment, the patient had a massive improvement, and was able to avoid the surgery because she had no signs or symptoms of carpal tunnel anymore.  It’s been 3+ years and the results have maintained – although the patient has changed her lifestyle also.  Good thing she wasn’t “ready for the surgery.”

Without addressing this woman’s hormonal imbalance, which reflected through inhibited pelvic muscles (and symptoms of course), surgery for her carpal tunnel might have been the next step.

I’ll leave you with a bit more information on techniques that are actually employed to the patient under care.  In-office treatments may be any of the following or more: manipulation of any joint (including cranial), direct treatment to muscles (massage-like, trigger point and connective tissue release), stimulation of various organ/muscle/gland/neurological reflexes (through rubbing or gentle contacts), acupuncture point stimulation (w/out needles); in addition to identifying nutrient deficiencies and harmful offenders like food, chemicals, toxic metals, or pathogens (e.g.: yeast, parasites, bacterial, viral, etc. sensitivities).  In the future I’ll get more specific on how those offenders are identified non-invasively, in the office.  And I’ll also expand more on treatment techniques.

Applied Kinesiology can be truly holistic if the doctor can connect the dots appropriately.  True holistic and natural medicine should aim to “fix” the cause(s) of the problem and not paint over the rust.

(feel free to post comments in the form of questions)

Subscribe to receive email notifications of new posts and updates

This site uses Akismet to reduce spam. Learn how your comment data is processed.

Subscribe to receive email notifications of new posts and updates